The Summer of Friendship and a Little Sawdust Magic

Posted on September 12, 2016 by CatLadyintheCanyon 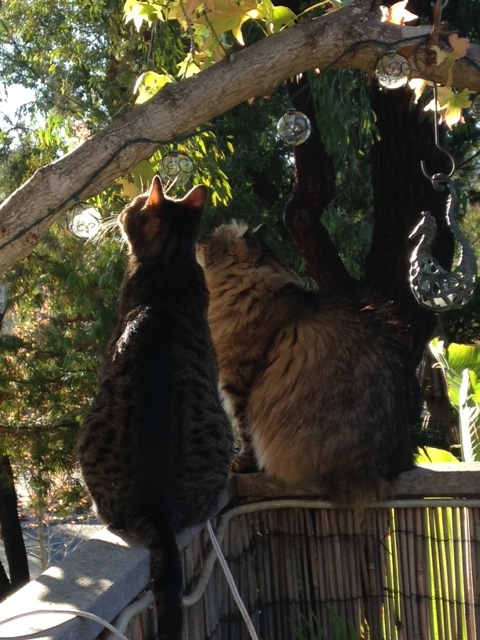 The summer of 2016 has been the Summer of Friendship for me and my clowder, which goes to show that not all cats are aloof loners like so many believe.  Meet the new friends, Squirrel, Casper, Mermaid and Little Piggy: 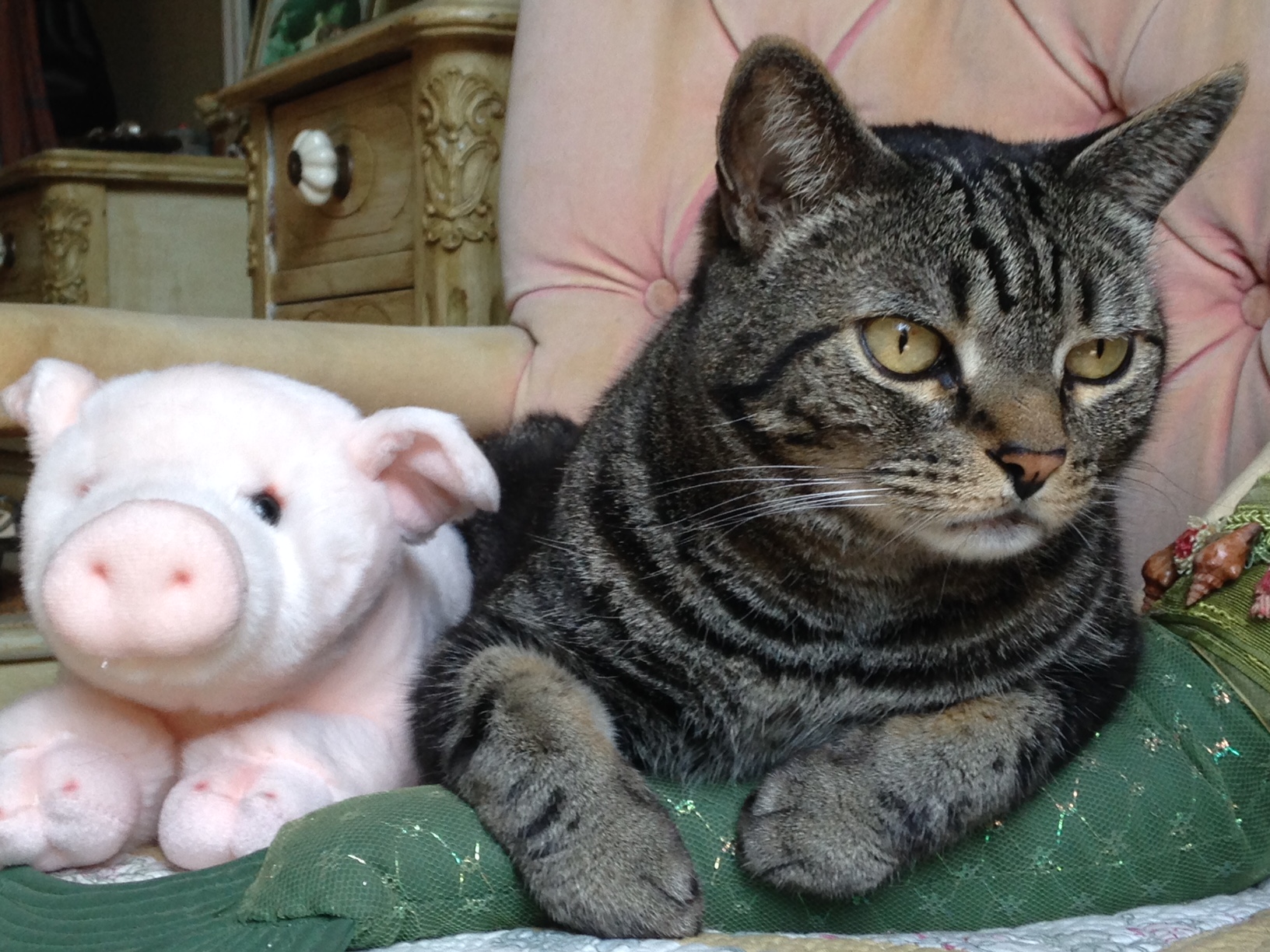 When Squirrel started coming by to nibble on the sunflower seeds in the bird feeder, her meals didn’t last long. She would bolt back up the tree as soon as she spied the cats eyeing her. Yet, soon she became one of the gang, frequently draping herself over the deck railing after a meal of sunflower seeds instead of running off into the tree branches. 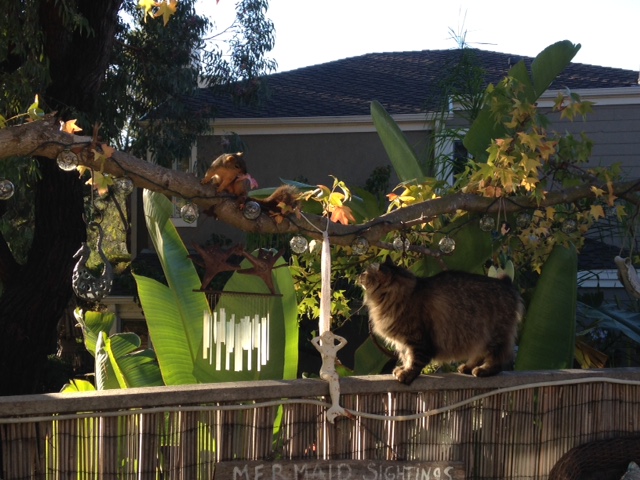 She would look down at the cats on the deck sunning themselves, and they would gaze up at her as if to say, ‘Hey, it’s another hot one—stay for a while and relax with us!”  When Squirrel drank from the water bowl hanging upside down from the bamboo siding on the deck railing, that was it—she was in. 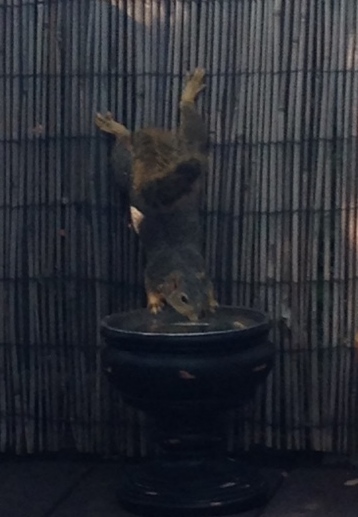 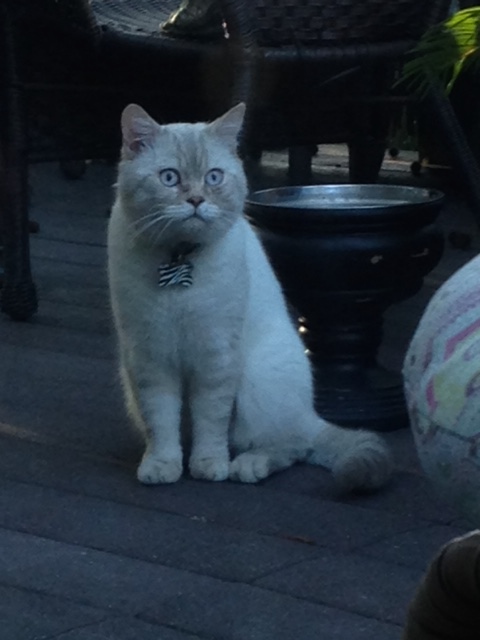 Another visitor to frequent the deck this summer was a handsome white cat with piercing blue eyes, who I’ve dubbed “Casper.” I first met Casper when the wailing of cat cries lead me to the deck to find this feline intruder surrounded by my boys who weren’t exactly inviting him to stay for a little afternoon roll in the catnip. No, this was a rumble in the works of which I broke up. “Okay, guys, enough with the yowling. Let’s leave our new friend alone. He just wants to say hi,” which caused my cats to back off enough for Casper to slowly turn around and hop the railing. Casper continued to come by and eventually, the boys befriended him, yet with boundaries—they don’t share their catnip, but Casper can at least hang out. 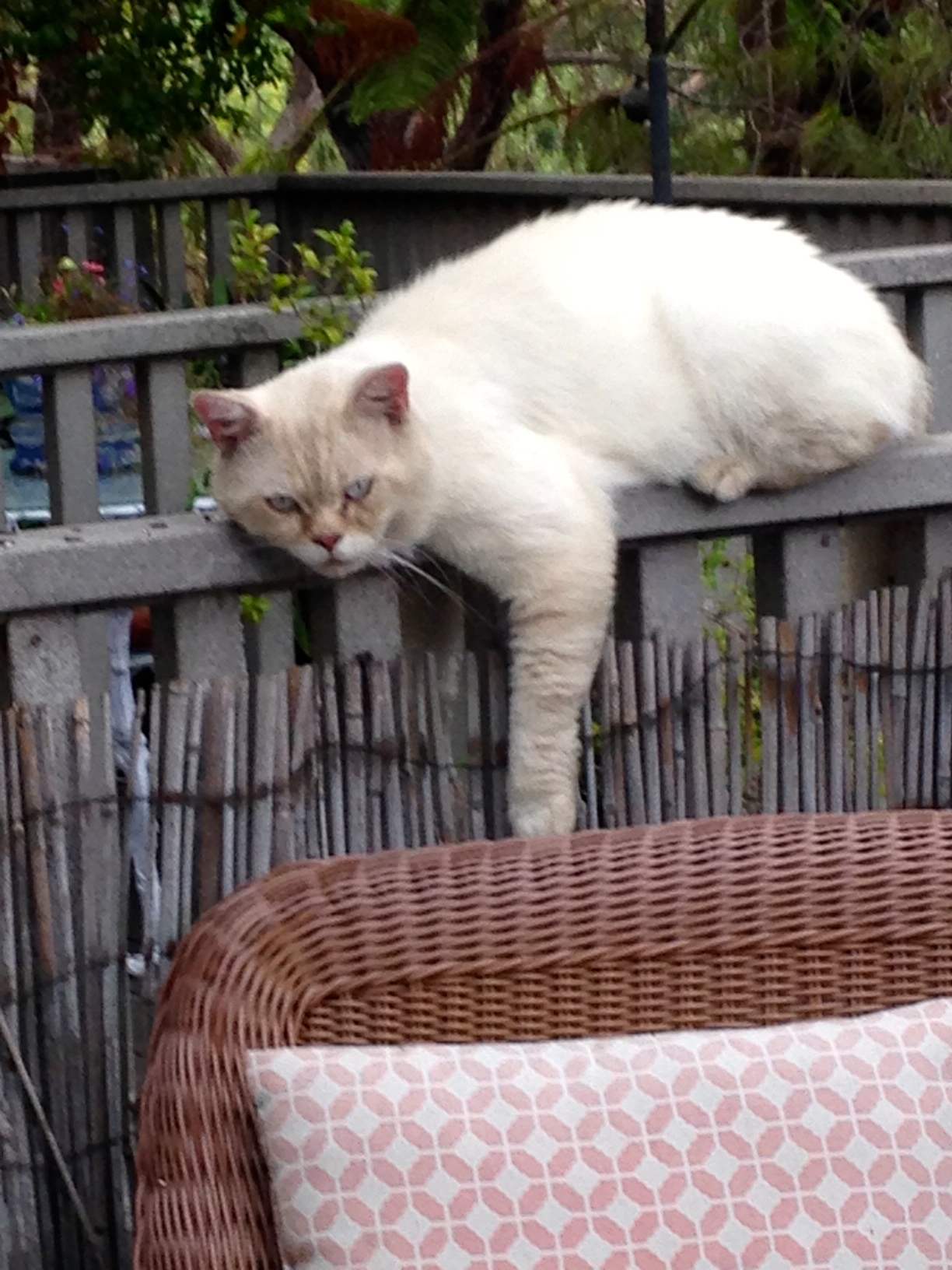 Topper is most content when he’s hanging out with Mermaid and Little Piggy. 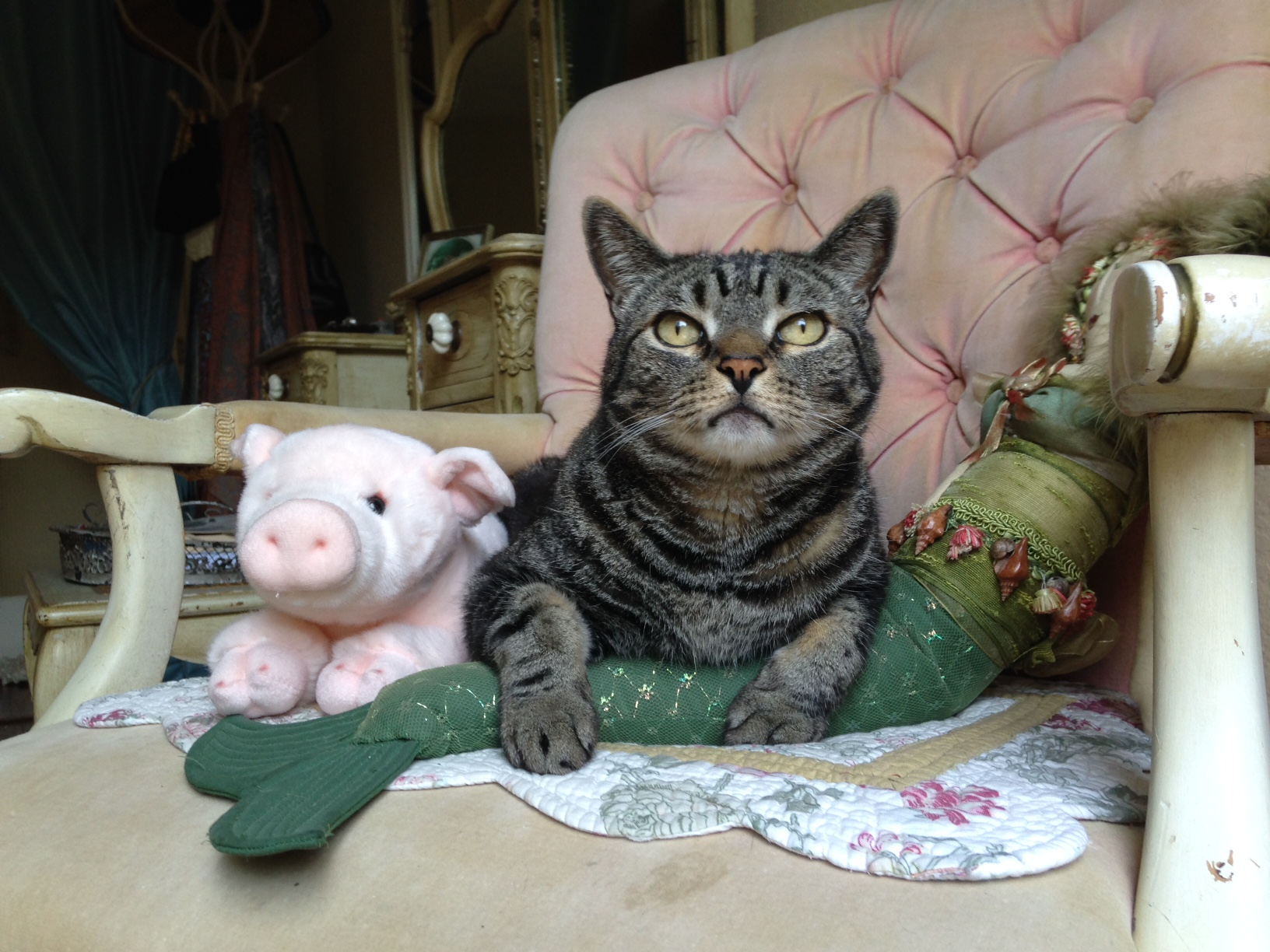 These companions provide a cozy place for Topper to nap and have lively conversations about Mermaid’s life in the sea, and Little Piggy’s big winnings on the track when he toured with the                      All-Alaskan Racing Pigs. 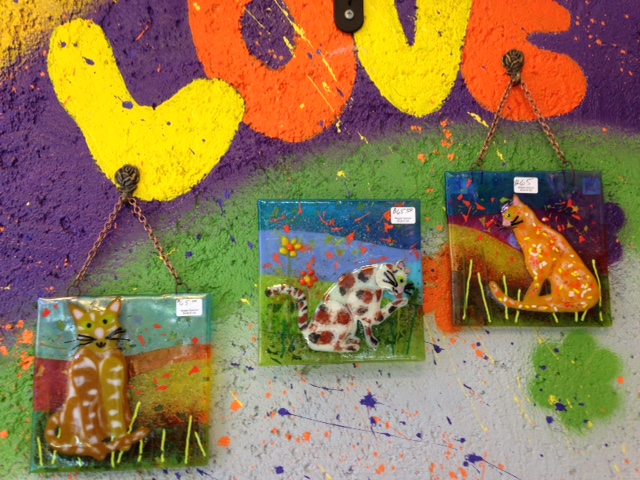 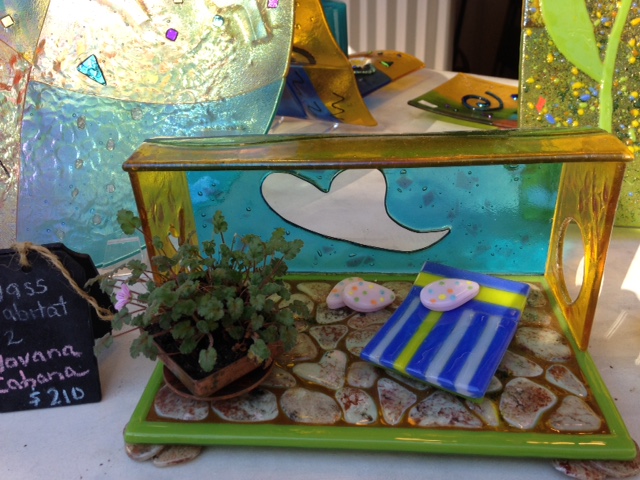 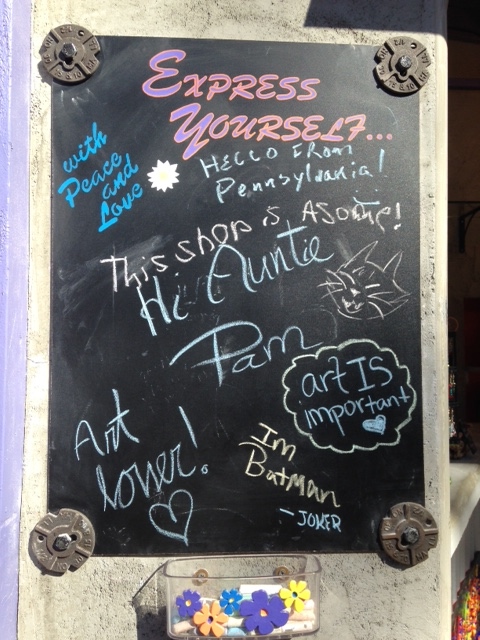 …where I, myself, formed friendships with an eclectic group of individuals. 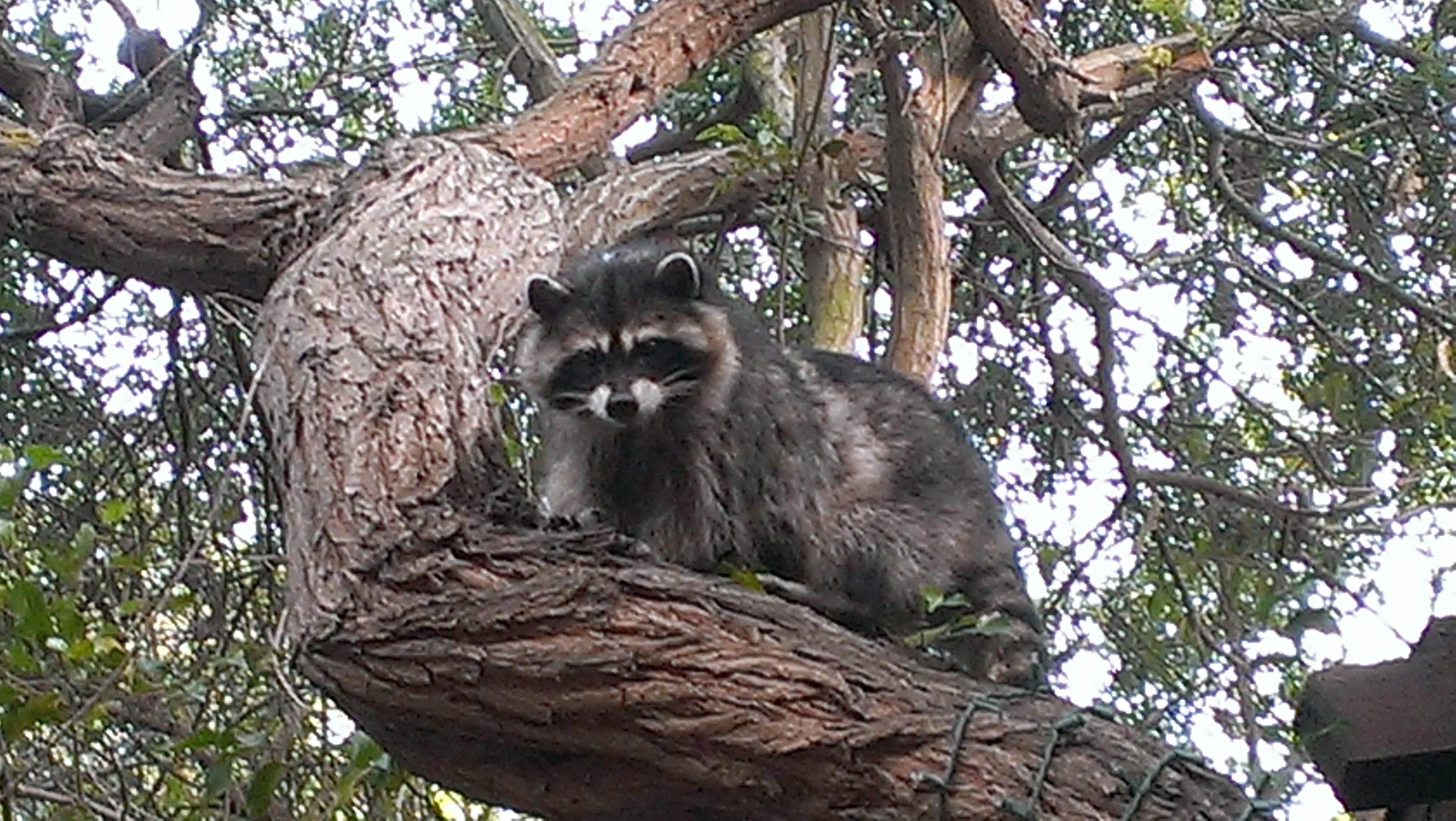 I bet the cats would have enjoyed meeting Sawdust’s resident raccoon.

August 28th marked the end of Sawdust, and much like the end of summer camp, I exchanged “see you next summer” goodbyes with some very special people: 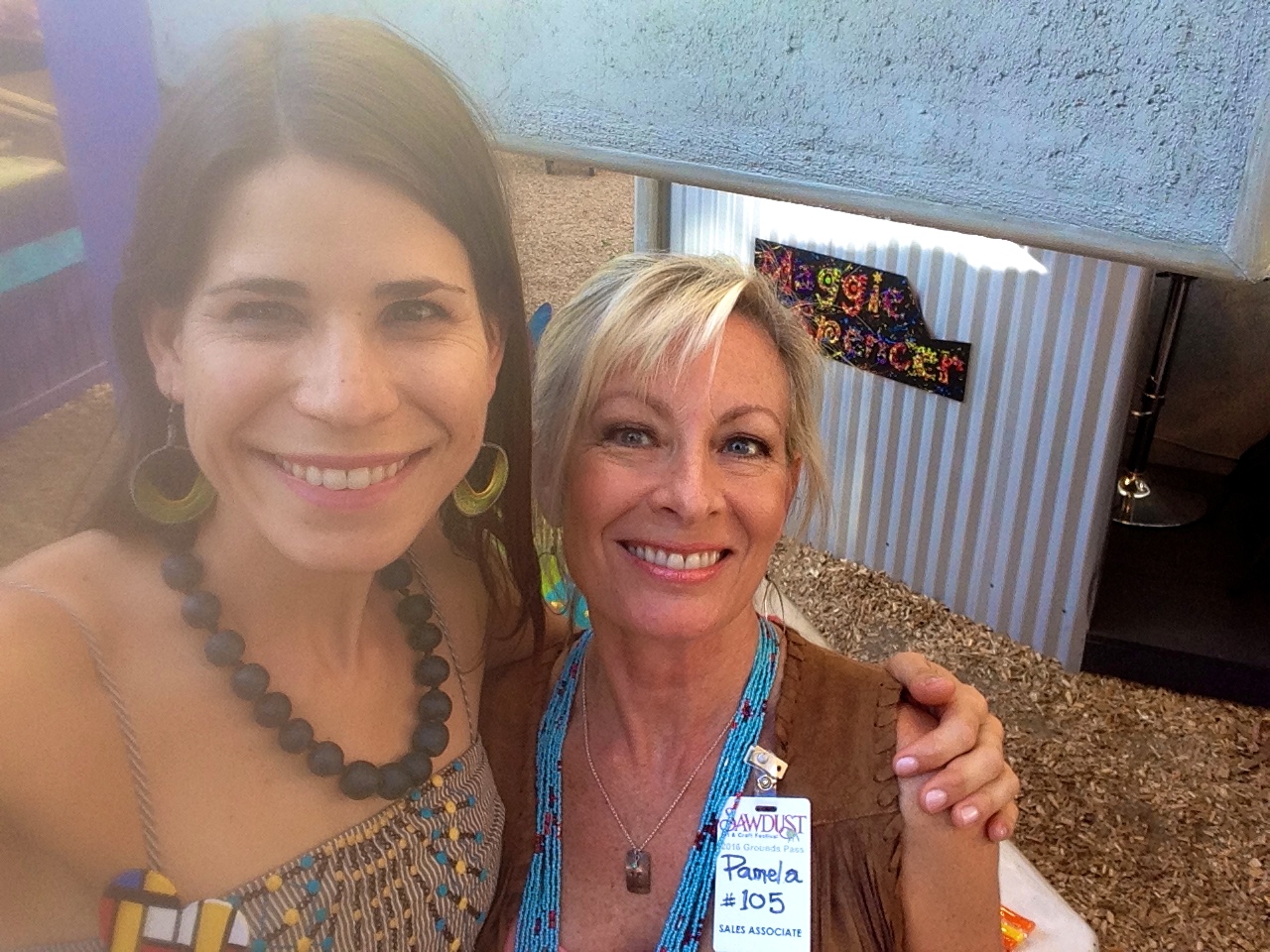 Brynne with the beautiful smile and inspiring textile designs; Greg the turquoise jeweler who came through a portal into our world from a time long ago when fairies and chivalry existed; 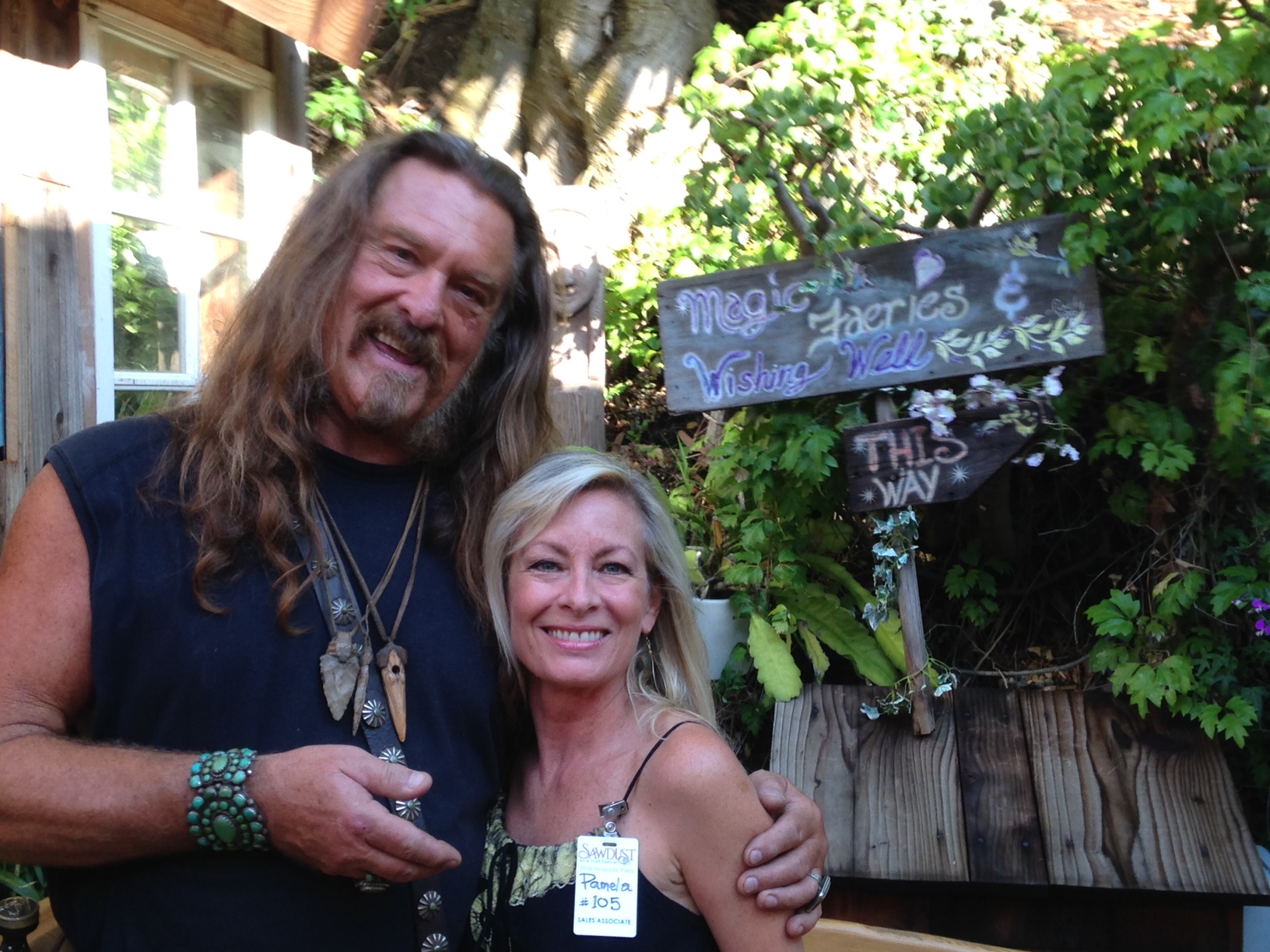 Stephen whose subjects in his photography are as humorous as his dry wit; Stephen’s outgoing assistant Kathy; Jamie with her empowering words not only spoken but expressed in her bracelets and pendants; Gary, not a new friend, but Sawdust instigated a new beginning… 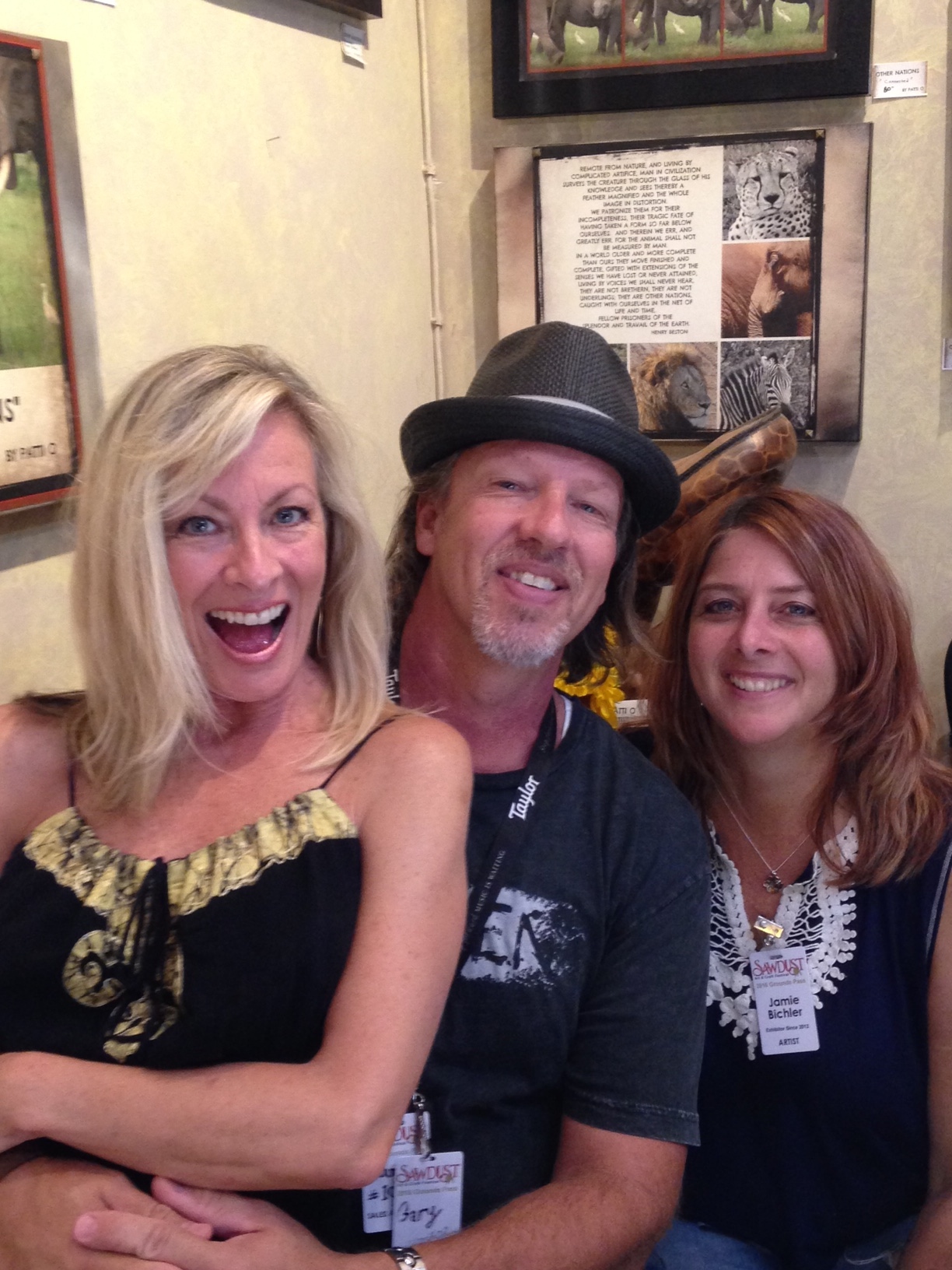 silversmith hippie Dave, one of the original Sawdust exhibitors; potter Mark, who took this year off to cope with the passing of his wife; Tom the sculptor in the booth next door; Jesse the tile maker; Doug the prolific painter and violinist; fun-to-banter-with sales associate Tony; and Jimmer, Sawdust staffer who worked the door and whose greetings always made me smile. 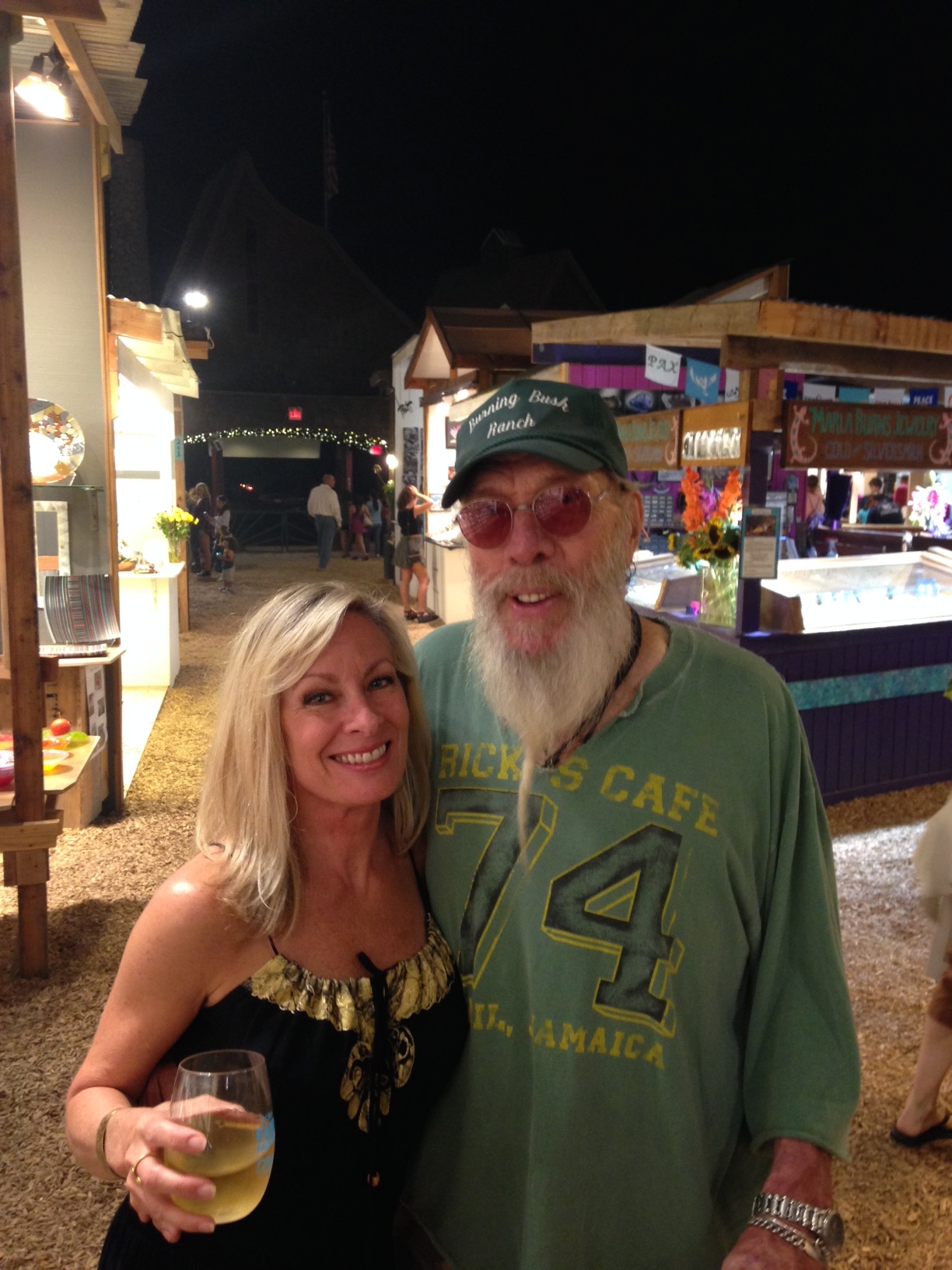 To read more about the iconic Sawdust Festival and its talented artists, visit: sawdustartfestival.org/artists/ 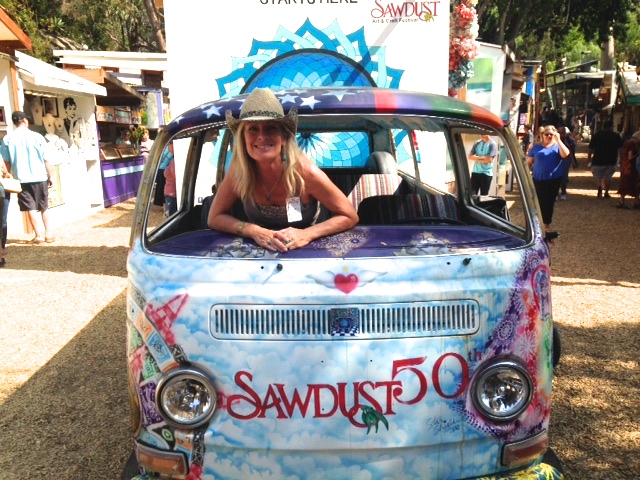 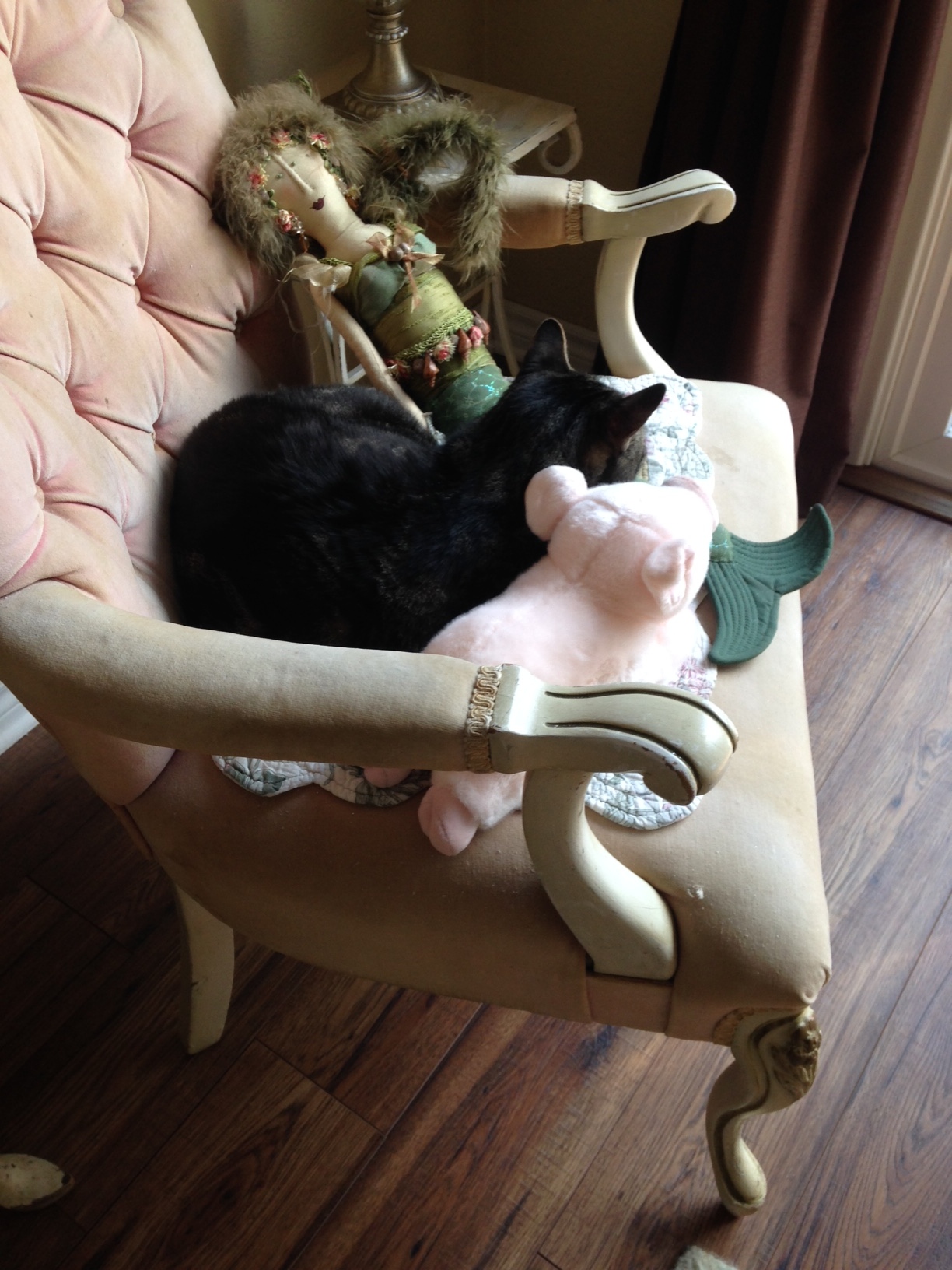