Posted on April 12, 2016 by CatLadyintheCanyon 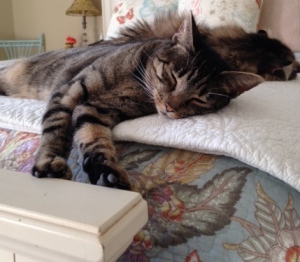 It’s almost been a year since Bobcat became a squatter in my home. Up until December, when he became sick with what appeared to be a nasty cold, he was just “the cat who was staying with me.” Then I had to step-up my cat lady responsibilities and take Bobcat to the vet. Up until then, I had been feeding Bobcat and letting him into the house when he pounded at the sliding glass door or when he appeared at the window in my loft late at night, sitting on the roof and leering at me with glowing eyes. That was it—food and shelter. I was not willing to accept him as mine—this neurotic wayward cat who unilaterally decided that my home was his home.

But that day in December changed my “cattitude.” I put him in the carrier and drove him to the vet—a task I’d been dreading given his jumpy nature. Yet, he gently succumbed to the confined space. With his front paws tucked into his chest and a look on his face of calm curiosity, off we drove, down Laguna Canyon Road to see Dr. Bondurant at Laguna Beach Veterinary Medical Clinic. Bobcat not only endured the car ride in the rain, he took in the sights of the canyon like an eager tourist. 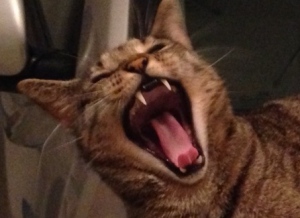 Bobcat patiently waited in the carrier while I completed the medical forms. In the exam room, he was shy with Dr. B, but compliant while he quietly tolerated being medically evaluated. Bobcat was diagnosed with an upper respiratory infection, but otherwise he was in very good shape. Dr. B gave Bobcat a shot of antibiotic and prescribed an antihistamine, which I would have to administer twice daily for several days. “That doesn’t come in a shot? Seriously?” I asked, dreading having to pop pills into squirmy Bobcat’s sharp-toothed mouth.

The following day, before his sneezy symptoms returned, I braved the jaws of Bobcat. I needed to get that pill into his mouth and down his throat before he knew what hit him. Butter came to mind as I contemplated this dreaded operation. I took a few deep breaths, cleared my mind of images of Bobcat spitting the pill at me and cursing in cat speak, then I approached the beast. “Hey, Bobbycat…how ya doin’ sweetie?” He looked up at me, and I quickly had his jaws in one hand, and the butter coated pill in the other. I opened his mouth, placed the pill on his tongue and prayed. 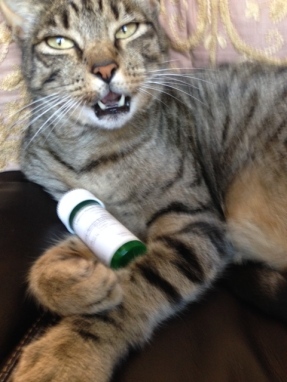 Bobcat shut his mouth and swallowed. Done. The pill went down effortlessly, with no cat cursing, no clawing, and no fuss. 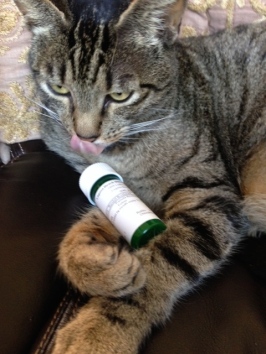 After a few days of easy breezy medicating, Bobcat started bolting around the house again as though chasing imaginary prey. He was on the mend.

Bobcat now had a vet and medical records that declared him as my cat. This exasperating cat who became cute when I took him to the vet, and cooperative when I had to medicate him was now mine. 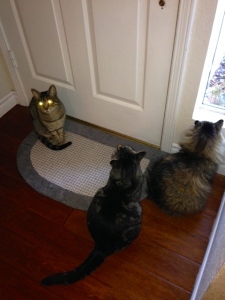 And that is when my cat crew of two officially became a clowder of three.

7 Responses to And Bobcat Makes Three