About the Cat Lady 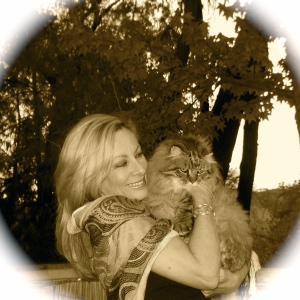 My Kind of Crazy

My cat craze started as a toddler. I grew up with cats and dogs, and revere all animals, yet I have always had an affinity for felines.  I became known as the “cat lady” in my Laguna Beach neighborhood upon moving-in with two cats, Punkie and Lexington, and later joined by Topper. When Punkie lived-out her almost 20 years, Bella joined our clan, and a few years later passed, but then Bobcat came into my life.  Besides my current feline family, I’ve had cat companions throughout my life that have helped me earn the title, and yes, “crazy” has been attached to it by some. I’ve raised cats from kittenhood through adulthood and into their “golden years,” and have experienced the passing of four of my beloved cats.

Cat Lady to the Rescue

I’ve either adopted rescue cats or have directly rescued all of the members of my feline family, from Frankie, who was abandoned in an alley at 6 weeks old to Lexington, who was one day away from being euthanized and who I adopted from New Beginnings for Animals. You will get to know them all as their stories unfold.

Crazy About the Cat Cottage

I’m a volunteer at The Blue Bell Foundation for Cats, a nonprofit organization that operates a cat sanctuary in Laguna Beach, which provides permanent housing in a vintage cottage for senior cats whose companions can no longer care for them, usually because of passing, illness or other life altering event. For those in need of such service or who would like to make a tax-deductible charitable donation, please visit www.bluebellcats.org.

11 Responses to About the Cat Lady