Ghosts of Halloween Past…and of a Furry Kind

Posted on October 28, 2015 by CatLadyintheCanyon 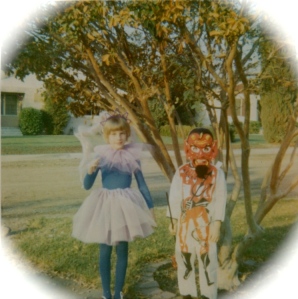 Each Halloween season, as I take out the black cat and witch decorations, I’m instantly transported back to a more simple time; back to the late ‘60s and early ‘70s, back to the house on Whitcomb Street in Glendora, California. Nostalgic memories take hold of my mind: telling ghost stories with my friends in the orange grove at the end of our block, and daring each other to trick-or-treat at the mysterious house up the street known as the “Tin Palace.” And every Halloween there was the house on Leadora Street that transformed into a haunted house, where we would stand by the curb collecting the courage to go up to the door while paralyzed by the clanking chain and sinister laughing sound effects, strobe lights and ghoulish figures ushering in the brave trick-or-treaters.

Fast forward to the year 2014, a couple weeks before Halloween during a “girls-night-in” at my place. We were lingering around the dining room table after dinner when I suddenly recalled that Lori, who was sitting across from me, once told me that her Laguna Beach apartment was haunted. “Hey, Lori, why do you think your place is haunted?” I asked. “Ooooo, let’s tell ghost stories,” the gals said almost in unison, making me feel like a kid in the orange grove again. As I poured the group another round, Lori told us a grown-up ghost story: One night after returning home from being out, Lori was walking up the narrow hallway of stairs leading to her apartment when she saw a man, woman and young girl at the top of the stairs on the second story landing, which would have been no big deal except that they were standing motionless, dressed in “Little House on the Prairie” clothes, as Lori described, and appeared somewhat transparent. “Ok, ghosts,” she thought, and walked into her apartment unfazed. Lori doesn’t spook easily, but when she woke up one night to her bed shaking, she’d had enough. “GET OUT!” Lori shouted, and hasn’t seen or felt them since.

“Well, I haven’t seen ghosts,” I told the girls, “but one October night a few years ago, when I was up late reading in the living room, all three lights in my ceiling fan flickered in sync several times, like a flashing strobe light, then suddenly stopped.  Then—I heard scratching sounds coming from the ceiling. The lights flickered again and stopped, but the scratching kept coming back—even in middle of the night—totally freaked me out! And I heard it again several times that week!” Turns out that my ghost was a raccoon who found its way into the crawlspace. I had my spirited raccoon captured and released back into the wild. 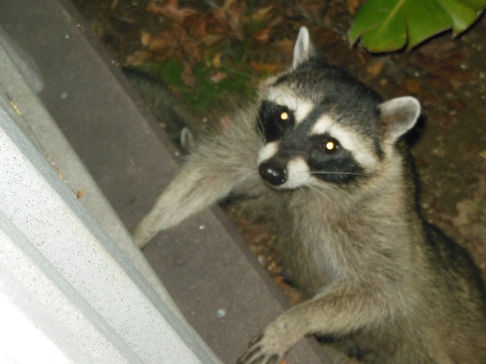 Although…the lights in the ceiling fan have done the strobe light thing since the raccoon haunting, and I’ve seen the filmy shape of a cat entering and leaving my bedroom. I mostly see its hind legs and tail before phantom cat evaporates into nothingness. And there are those times at night when my perfectly peaceful cats will suddenly spy something that spurs them into a frenzy.

Their eyes become crazed and they leap off of the sofa, darting around the room chasing something that I can’t for the life of me see.

Perhaps there’s more going on here than a wayward raccoon.  Or maybe I just want to keep the spirit of childhood alive and with me forever.