The King of Blue Bell

Posted on May 20, 2015 by CatLadyintheCanyon

I think it’s human nature to assume that iconic individuals will be in our lives forever, especially those whose artistry makes an indelible mark on culture. When I opened the newspaper last week to read that B.B. King had died, I was shocked and saddened, but not surprised. He was after all 89 and had suffered diabetes, declining health and was in hospice. As I read the article I recalled when I saw him perform at the Doheny Blues Festival during his 80th Birthday Celebration tour, and wow—he still had it goin’ on. His guitar riffs and velvety voice made me forget he was 80. He may have passed on, but he lived a long inspirational life and made renowned music for the most of it.

A week before The King of Blues passed, another icon of a feline sort departed from this world. Smokey, the 21 year-old longest residing feline of The Blue Bell Foundation for Cats lost one of his nine lives on May 14, 2015. When I heard the news, I was also shocked and saddened, but not surprised. During my last visit to Blue Bell, just days before he passed, Smokey was sleeping in his usual spot on an upper level bunk bed in the main room. He woke up and raised his head to greet me as I walked over to him.  I scratched under his chin and said, “Hey, handsome, how ya doin’,” to which he responded with a purr and a long deep stare into my eyes. I could almost hear him say, “I’m about done.” He looked very tired.

Smokey joined Blue Bell in 1998 at the age of about 4. Prior to his arrival, he got into a brawl with a raccoon and ended up with a blind left eye; not bad considering he was up against a brute who could’ve out clawed him far beyond one eye. And I bet that raccoon never scrapped with a cat again. Smokey was a bad-ass alpha cat, but he was cool about it.  Some alphas like to pick fights to show who’s boss. With Smokey, just a look would clear the room of irksome felines. 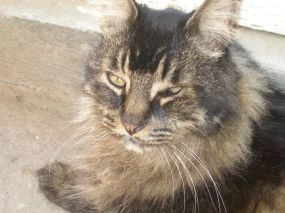 If Smokey were to be compared to someone, well it would have to be actor Sam Elliott, especially his character Wade Garrett in that campy classic, Road House. Ruggedly good looking, with a smooth swagger and courteous manner—but don’t mess with him. 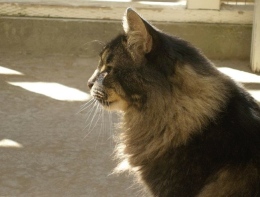 Smokey was a cool alpha cat who’d toughed it out with a raccoon, and spent most of his 21 years as the reigning feline of a cat sanctuary in Laguna Canyon. He certainly wasn’t a famous blues musician, but Smokey was The King of Blue Bell, and he will be missed.

7 Responses to The King of Blue Bell