Posted on February 4, 2015 by CatLadyintheCanyon

Lexington, my burly Norwegian forest cat mix, who other than suffering allergies has been a spunky, healthy boy, was diagnosed with feline diabetes in December. It seemed to be caught in its early stages, as after about 3 weeks of observing his appetite and water intake increase, I took him to the vet.

Sure enough, his blood sugar in both a serum and urine analysis was around 450. He’d lost a pound since his last vet visit just a month prior. My poor guy was not doing so well, but I learned that with insulin and a high protein, low carb diet, the disease would be manageable, he would be feeling great again, and after research I found that 80% of diabetic cats go into remission. So a few changes were in order—his diet, timely insulin injections and careful monitoring of his behavior.

The vet tech at Laguna Hills Animal Hospital gave me a tutorial in how to give an insulin injection, which is actually pretty darn easy, especially when I catch Lex unaware. As far as the diet goes—this turned out to be a change for the positive. Read and take heed—cats are obligate carnivores, meaning that by necessity, cats (wild and domestic) require a high animal based protein diet, which boils down to—meat. They are genetically hard wired this way. Our pet cats have the same digestive system as their wildcat ancestors. They don’t need rice, wheat, or corn, which can cause digestive upset and cause inflammation, the precursor to many diseases (for humans too!). My first line of action was to go grain-free. Even though my cats have always eaten high quality food, the dry food contained rice or wheat, which they ate a lot of. I learned through research and a talk with Jessica, owner of Coast Pet Supply in Laguna Beach that the best diet for a diabetic cat is a raw meat diet fed twice daily or a high quality meat protein canned food void of carbs. I gave it a whirl and purchased Rad Cat raw food for my Lex and he loves it. To keep costs reasonable, his diet now includes raw food a few days a week, high protein no carb canned food and very small servings of top quality low carb dry food. This adds up to a bit more than what I was typically spending on cat food, but I’m hell-bent on healing Lex and keeping Topper healthy, so I find the extra expense will save me future vet bills and give me peace of mind knowing my cats are eating what is best for them. 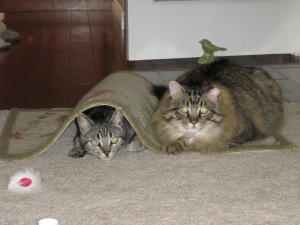 Within a few days of the new regimen of insulin and top-quality food, Lex had more energy and had gone back to being his sassy self. Within a week, my boyfriend Gary and I both realized that Lex’s allergies were GONE! No more incessant scratching, frequent sneezing and coughing, and non-stop teary eye. He has had a few cortisone shots over the years, which would temper the symptoms, but never cure them. I had tried changing his diet, but everything I gave him contained rice or wheat; therefore rendered no positive results; but little did I know. It’s like magic—no grain, no allergies.

Note: grain-free doesn’t always mean low carb as many cat foods include potatoes and other vegetables, which are also carbohydrates. The wet food my cats are now eating by Wild Calling contains meat, organs (such as liver), water and vitamins—no grain or vegetables and its made in the USA—Colorado, and both my cats think it’s delicious (I can tell by the way they gobble it down and beg for more!). 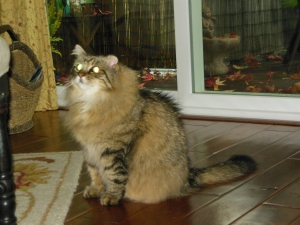 Lexington’s journey through the healing process will be continued—stay tuned!